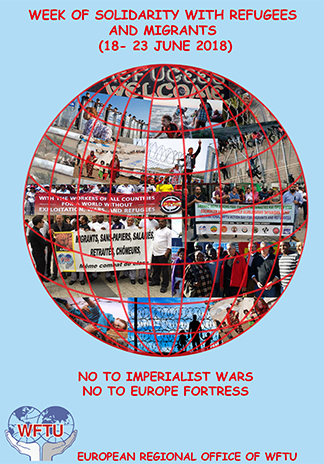 “War, violence and persecution around the world force more people than ever to be displaced from their homes”, “…there were 65.6 million people displaced worldwide by the end of 2016 – nearly 300,000 more than last year.”

This is the assessment, according to the United Nations High Commissioner for Refugees annual report “Global Trends”, which is the organization’s largest annual survey on the phenomenon of displacement.

Once again it is noted that imperialism’s aggressiveness, the neoliberal policies of the capitalist system and the exploitation of the natural wealth of their countries, are driving millions of people from Africa, Asia and the Middle East to be uprooted in the search for a better life.

Thousands of people, in their quest to escape imperialist wars, poverty, hunger and misery, are victims of slave traders and they often lose their lives stacked in old boats that sink in the Mediterranean.

The thousands of people who take the road of refugees because of the imperialist devastation that has hit their countries are confronted with the policies that the European Union is implementing.

The European Union bears huge responsibilities on the one hand for the uprooting of millions of people as refugees because, together with the United States and NATO, it supports or participates in wars and interventions that have led to destabilization in the Middle East and North Africa, while EU governments are cooperating and funding interventions. On the other hand, and as result of the EU’s anti- immigration policy, people who left their homeland to be save themselves from the horror of war, are confronted with  repressive mechanisms, the patrols of Frontex and NATO, the walls and hedges are barbaric choices that provoke greater tragedies.

The class-based trade union movement in Europe expresses its solidarity with the refugees and demands and asserts measures and the creation of dignified reception and integration infrastructures for refugees, safeguarding opportunities for dignified work, health, education and social life, the regularization of migrants and refugees, the end of deportation.

We must intensify our actions against imperialist barbarism, the termination of imperialist wars and the dissolution of NATO, which is the cause of the suffering of the peoples. We need to struggle against nationalism that is dividing working people against racism and xenophobia, which enables capital to intensify its exploitation to the detriment of workers.

The European Regional Office of the WFTU calls on working people in Europe on the occasion of 20th June to a week of solidarity (18-23 of June) to demonstrate their solidarity with the victims of imperialist wars, to strengthen solidarity between the peoples and to build a front of resistance against fascism, racism and nationalist hatred.