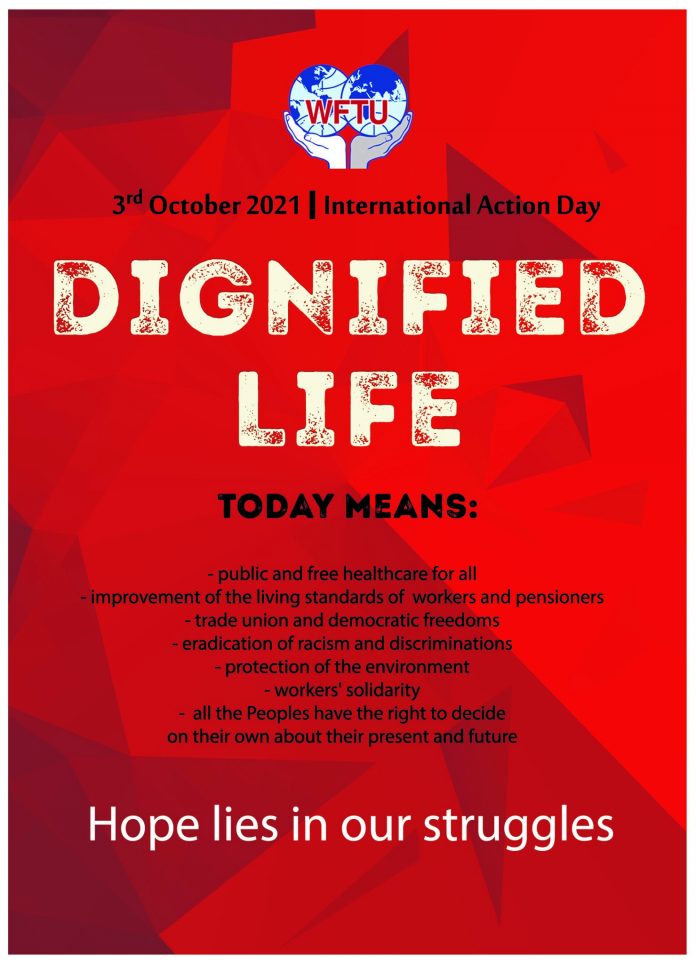 On the occasion of the 76th anniversary of the founding of WFTU, on October 3, 1945, for one more year we honor its history and militant course by promoting the following demands:

– Public and free healthcare for all

As the pandemic has proven, when health and medical care are considered to be a cost by states and governments, it is workers who face the tragic consequences of the undermining of public health. The WFTU members  since the first moment of the Pandemic dynamically claimed public and free healthcare, safe and free vaccines for all. During the recent WFTU Symposium on Vaccines and Medicines, all the trade unionists who took part argued loud and clear that health, medicines and vaccines cannot be commodities, that they should be social goods, and subsequently that patents on medicines should be completely abolished. A relevant resolution with the decision of the Symposium was sent to all the International Organizations.

– Improvement of the living standards of workers and pensioners

Nowadays, the enormous wealth that is produced is enough to cover all the contemporary needs of all workers and Peoples on earth. However, the contradictions between the workers and the few powerful ones increased with the outbreak of the new economic capitalist crisis. Under the pretext of the pandemic, the governments passed new anti-labor measures attacking salaries, pensions, working conditions of workers. Poverty, extreme poverty and unemployment are on the rise. High prices in fuel, heating and basic goods will deteriorate the situation of all workers and their families. We demand  immediate improvement of the living standards of workers and pensioners by increasing salaries and pensions, with Collective Agreements that ensure dignified working conditions, with social security for all.

Over the last time period, trade union freedoms and democratic rights have been limited around the world, so that the Peoples accept the failure of the capitalist states to manage the pandemic; so that they do not react to the new anti-people measures and they do not organize their struggle against their acute problems. The repression against workers’ and  popular protests in Latin America, Europe, Asia, etc;  terrorism, violence by the forces of repression under the pretext of measures to contain the pandemic; new measures to limit the right to strike, to monitor and control the unions; the persecution of trade unionists; all the aforementioned must not lower the morale of workers. As history has repeatedly shown, workers and the Peoples have the power to overthrow their oppressors, they are the ones who have the last word when they struggle and put forward their demands in an organized and decisive manner.

– Eradication of racism and discriminations

The WFTU calls upon all workers to struggle together regardless of race, nationality, language and religion for their common interests; to strengthen the joint struggle against racism and xenophobia, against imperialist interventions that create flows of refugees and migrants, for dignified living conditions for refugees and migrants, for the end of imperialist wars and exploitation of local and foreign workers.

–Protection of the environment

The position of the class-oriented trade union movement for adequate measures to protect the environment and workers against fires, floods, earthquakes, hurricanes, droughts, etc., is firm. The lack of these measures is diachronic and responsible for the great disasters in the environment and for the victims who mourn the Peoples after every natural disaster or extreme weather events. The criminal refusal to allocate funds, human resources and equipment for protection measures and for appropriate infrastructure is the responsible for the consequences of disasters, and not climate change. The workers must intensify our struggle for immediate measures to protect the environment on the basis of contemporary needs by utilizing the advances and achievements of science and technology.

The expression of workers’ solidarity and internationalism is a powerful weapon of workers and Peoples that puts pressure on the enemies of the working class, cultivates friendship and support among the workers and makes them stronger in their struggles. The WFTU, with the Campaign of Solidarity and Relief to the Palestinian People, calls on all militants to show their support in practice to our Palestinian brothers and sisters, who have recently been hit by new Israeli raids.

For one more year, new imperialist interventions and plans were launched against the Peoples of Palestine, Cuba, Afghanistan, in the interests of the monopolies of the US, EU, and their allies. We stably and unwaveringly express our solidarity with the Peoples who suffer from imperialist wars and interventions in the context of the economic and geostrategic rivalries of the powerful states; we strengthen our struggle for peace, for the right of the Peoples to decide for themselves about their present and future without external interventions. International Organizations must play their role in ending interventions and sanctions against Syria, Yemen, Palestine, Cuba, Venezuela and Afghanistan. Following the successful holding of three International Conferences in solidarity with the Peoples of Venezuela, Palestine and Cuba, with a number of other events and actions, the rich internationalist action of the WFTU,  of its members and friends, will continue.

We invite you to honor October 3, 2021, in any way that is most convenient for you. Convey to workers that HOPE lies in our STRUGGLES.

In this way, with internationalism and militant spirit, let us all united prepare for the 18th World Trade Union Congress.