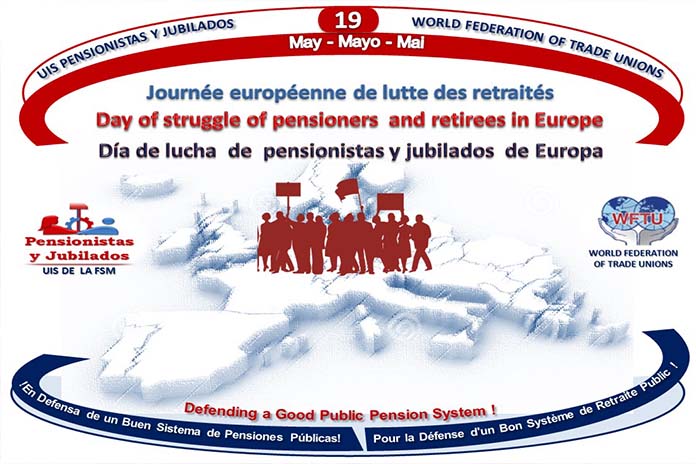 Of the PENSIONISTS and RETIRED

In DEFENSE of the PENSION PUBLIC SYSTEM

CALLED by the TUI of P&R of the WFTU

The TUI (Trade Union International) of the WFTU (World Federation of Trade Unions), which has been in existence for more than 4 years, and which has already convened 3 World actions of the P & R (Pensioners and Retired), has decided to call to a First European Regional Action in Defense of the Public Pension System for next May.

We have chosen on Saturday May 19 to go out into the streets, in every European country, and in its main cities, to show that our struggle in defense of the Public Pension System is a common struggle of workers across Europe.

The actions of 1st May will have taken place, already. The workers will keep in mind that there is class struggle (and that it will exist as long as there is capitalism, that is, the exploitation of man by man). And the P & R, as part of the working class, we have our own claims.

We have already expressed them publicly in most European countries, highlighting the great actions in the Spanish state, in Greece, in France and in many other countries.

All the actions agree on the need to maintain and expand the rights of the P & R won in long struggles. These rights are summarized in the vindication of being able to end our lives in decent conditions, as a compensation to the decades of work and contribution of wealth to the societies in which we live.

Thanks to our work, private and public companies have run, but ervices that are useful to society and have generated enormous wealth are increasingly distributed worse and in lesser hands. Capitalism only knows (it is inherent in its essence) to increase the differences between rich and poor.

Thanks to the example of the countries that built socialism (until the capitalist counter-revolution) and thanks to the struggle of the working class during the twentieth century, public pensions that allow living with a certain dignity were generalized.

Living with dignity means for our UIS, the availability of: 1) habitable housing, with drinking water, electricity, heating, etc .; 2) healthy and sufficient food; 3) Health, leisure, culture and local transport of quality (public and free). All this is related to having a sufficient pension.

But today, in the XXI Century, the successive structural and systemic crises (that is why they are repeating) of capitalism are leading its world and European leaders to look for new large funds of economic resources. And they discovered that the Public Pension Funds accumulate more money available than the big banks.

Therefore the IMF (International Monetary Fund) and the EU (European Union) have launched to want to pass these public funds to private, as did Pinochet in Chile (supported by the yellow unions, today called CSI) in the 70s of the past century (with the consequence that pensions in Chile have become 50% of what they were before their privatization. But the banks and the leaders of the yellow trade unionism have enriched themselves by robbing the employees).

To achieve the objective of the IMF, public benefits must be deteriorated and to affirm, even if it is a lie, that the Public System can not work. And so that it does not work the pensions money is spent on other budget items, the money dedicated to health and other benefits decrease, the contributions of the employers to the Public Pension Funds decrease, they give subsidies to the entrepreneurs for new contracts that they do not pay taxes or social contributions, etc.

Let’s say enough to all these measures and to these governments that do the opposite of what they promise when they ask for the vote. We are going to do it, for the first time, in unison from the different European countries.

We are going to claim:

1) Right to retire from the age of 60 (and before in special tasks).

4) End the gender discrimination that makes women (in Europe) average 42% less than men.

8) Dependency laws that are enforced, without excuses (such as those given by the PP in Spain).

10) Leisure accessible and free in the vicinity of the house.

12) Effective pensions, although the quota has been quoted in different countries.

13) That the capitalist states pay the Social Security contributions of all those who are on the list of unemployed (because the state is responsible for the organization of the economy).

To fight for all this we will go out on Saturday, May 19th, and we will deliver our list of demands (the 13 points mentioned above, plus the specific ones of each place) to the nearest authorities, whether or not they have competences in the issue of pensions (if they do not have them, as they claim the same our vote in the elections, their obligation is to defend what their fellow citizens demand).

Let’s do: rallies, assemblies, meetings, demonstrations, ludic acts, parties, popular meals, conferences, parades, popular songs, noise (caceroladas), boos to those responsible for the nefarious capitalist reality, and everything that the imagination of the working class and popular believes convenient.

We will then send the summary of the fact and the photos to the address of the TUI of P&R of the WFTU to be able to make the final conclusion, and prepare the next action.

We will not stop fighting until we get our right demands.