Athens, 27th June 2018
European initiative of the WFTU WYC in solidarity with refugees and migrants
The Working Youth Committee of the World Federation of Trade Unions is moving on one more initiative for solidarity with the refugees and migrants in the continent of Europe.
The new initiative of the WFTU WYC is taking place in the framework of its 2018 campaign “Youth with Rights” and aim to condemns the capitalist barbarity and the imperialist crimes which in the profit-hunting of the bourgeoisie, create chaos, death and countless displaced people who are forced to seek a better tomorrow in foreign lands.
The Working Youth Committee struggling with class orientation and under the fundamental principles of the WFTU welcomes the migrants and refugees as an integral part of the working class of their new country and demands:
1. to receive traveling-papers for the countries of destination.
2. The hosting in human conditions
3. To be employed with equal rights as all workers.
4. To have trade union and democratic rights
5. To stop the promotion of racism, xenophobia and fascism which only serves disunity and imperialism.
The WYC calls the young people of every country in Europe to express their solidarity with the refugees and migrants who live in their country with several initiatives in the refuges centers, migrants’ neighborhoods, workplaces etc. under the slogan and the banner of the WYC 2018 campaign
We call upon the youth to spread the class analysis and struggles of the World Federation of Trade Unions and its more than 92 million workers in the 5 continents. 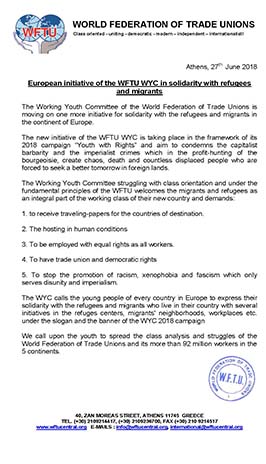