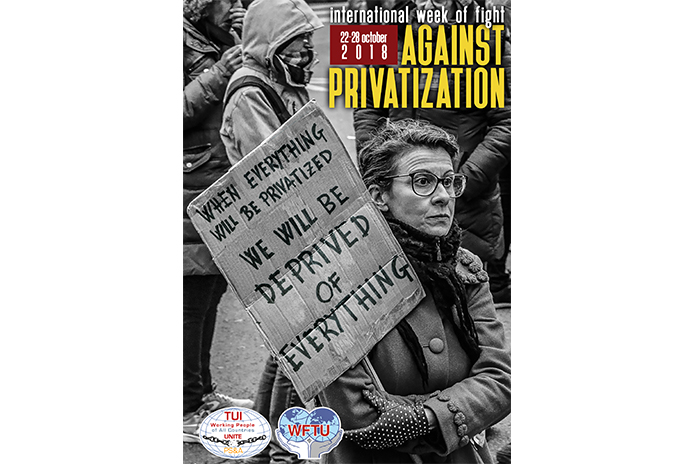 In 2016 TUI-PS launched the international day against privatizations, aimed at strengthening and expanding unity in the action of workers and peoples around the world in defence of public services and social functions of the states. From 22 to 26 October, once again we will organize initiatives, demonstrations, strikes or other actions to increase awareness on the disastrous impacts of privatizations on the lives of workers, peoples and countries, seeking to strengthen the fight to prevent new processes and to reverse those that have meanwhile been implemented.

The privatizing obsession is an essential feature of the character of the dominant world system, capitalism, even more so in a period when its crisis and contradictions heighten. The over-production and over-accumulation of capital, the destruction of productive forces, finantialization and investment only in what is solvable, the commodification and privatization of all public enterprises and profit-making areas, the establishment of mechanisms that compel states to guarantee private profits (public-private partnerships), mergers and acquisitions of companies with the objective of increasing profits with the resulting degradation of services, workers’ rights and cuts in employment, the appropriation of natural resources, leading to an unprecedented concentration and centralisation of wealth.

A system in crisis, based on the hegemonic dominance of transnational corporations, has led to the seizure of scientific and technical knowledge (often produced by public institutions and with funds that belong to all), shaping their results and in particular the productive forces and the labour world to increase the exploitation of workers, creating more unemployment and immigration.

A course made possible by a correlation of forces unfavorable to the workers and peoples and by the alliance between big business and state apparatuses, reducing the states to the role of bystanders in the production and distribution of the wealth produced (for its concentration). At the same time as taxes are increased for those who work and live on the income of work, pardons and tax incentives are granted to big business, capital flight to tax havens is facilitated. States are deliberately deprived of funds to ensure public services and state social functions of quality, universal and accessible, and thus binding them to debt – which feeds the greed for profits of financial capital. On the other hand, the growing concentration of political power in supranational structures aimed at the conciliation of positions by big business is being favoured, while suppressing any attempt by the peoples to define sovereign paths of emancipation, free from any external conditioning, an example of which is the European Union and also the so-called free trade agreements.

Aggression and war are increasingly the policy of the imperialist powers, as well as the militarisation of international relations, the attack on International Law, the sale of arms, the appropriation of natural resources, markets and energy routes. On the other hand, we are witnessing the restriction of freedom and democratic rights and the growth of extreme right and fascist forces, TUI PS&A via dell’Aeroporto 129 – 00175 Roma Tel. +39 0676282211 – Fax +39 067628233 – E-mail: [email protected] www.tui-ps.org

promoted by big business, to open the way to even more reactionary policies and denial of the right to progress and social justice

The result of the private appropriation of what should be public (belonging to all) is increasingly in view. Workers and peoples are denied their inalienable right to essential goods as well as to healthcare, social security, education, housing, transport, justice, culture, etc. Prices are rising, redundancies are increasing, recruitment is decreasing, degrading contracts and conditions of work and provision of services, closing down of services and establishments, quality and the rights of workers and users are reduced. The attack on the rights of Public Administration workers has a double effect, degrading their working and living conditions as well as the services and social functions provided. Denial of the right to employment, cuts in wages, freezing of careers, blocking collective bargaining and contracting, limitations on freedom of association and other collective rights – in particular the right to strike – increased working time and the proliferation of precariousness is detrimental to both workers and users.

The consequences and dangers of privatizations are transversal, affecting both the so-called rich and poor countries, as was the case of the collapse of a bridge in Italy (Genoa) – a paradigmatic example – exposing the full dimension of these processes.

With the promotion of this week against privatizations we want to denounce its impacts and seek to broaden and deepen the struggle for their reversal, defending public services and social functions of the states as a way to combat the glaring social inequalities and to implement rights. But at the same time we will place on the agenda that it is necessary and possible to have a system that rationalizes production to serve society and not to serve private profit.

The actions carried out by the trade unions in this area aim to strengthen the struggle in each country as the most fertile ground for the broader struggle of workers and peoples around the world, respecting their specificities.

Hence, the trade unions of TUI-Public Services and other participating trade unions will strive for unity in action to defend the rights and aspirations of workers and peoples:

– Opposing the externalisation and privatization of public services and social functions of the states;

– Demanding the end of precariousness and the principle that every permanent job must correspond to an effective working link;

– Defending the maintenance and creation of jobs with rights and with quality;

– Defending trade union freedom and the right to collective bargaining and contracting;

– Rejecting charitable policies and advocating a fairer distribution of wealth through the creation or improvement of public services and social functions of states;

– Advocating the end of the free movement of capital and the closure of all tax havens, as well as the so-called free trade agreements;

– Fighting against all wars of aggression and the militarisation of international relations, defending peace and internationalist solidarity, the end of interference in the internal affairs of states and the blockades, the principles of International Law.

TUI-PS is a sectorial and autonomous structure of the World Federation of Trade Unions (WFTU), which represents 23 million civil servants and carries out its activities in the central, regional and local Public Administration sector, in public and similar services on all continents.