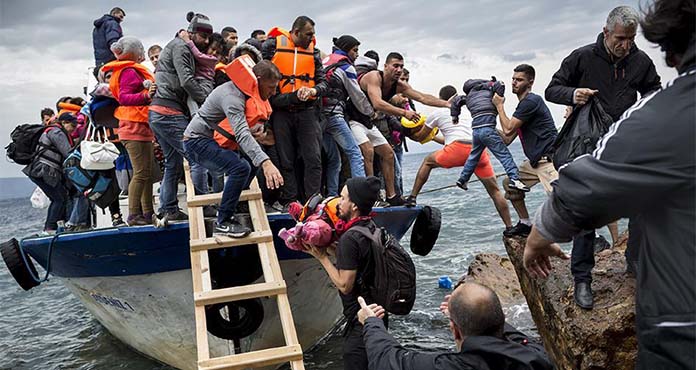 On the occasion of June 20, 2020, World Refugee Day, the European Regional Office of the WFTU expresses its class solidarity with refugees and immigrants.

Interventions and imperialist wars, poverty, and the plundering of the wealth of entire countries by multinationals have forced millions of people to abandon their countries as refugees and immigrants in search of a better life or to reunite with their families.

Thousands of people who are being uprooted as refugees because of imperialist wars are confronted with the policies being pursued by the European Union.

The European Union, together with the United States and NATO, supports or participates in wars and interventions aimed at controlling natural resources and imposing their interests, causing the displacement and migration of millions of people from their homelands.

Erdogan’s exploitation of the refugee issue to serve his geopolitical plans goes hand in hand with the EU’s hypocrisy that is leaving tens of thousands of refugees trapped on the Greek islands and other Mediterranean countries.

The coronavirus pandemic creates even more difficult conditions for people who, due to ongoing wars and conflicts, are abandoning their countries. In these difficult conditions that working people in every corner of the world as a result of the pandemic, there is an even greater need to strengthen solidarity and assert for effective protection measures for all workers, especially refugees who are in many cases trapped in terrible and dangerous conditions

At the same time, the peoples of Europe are following governments spending billions of euros on the war industry, attacking labour rights, imposing privatizations, intensifying the suppression of trade union rights, cultivating xenophobia and racism.

The class-based trade union movement in Europe on the basis of internationalism and solidarity will continue to struggle for strengthening solidarity and the common fight of workers.

• The abolition of the Dublin Regulation, the EU-Turkey Agreement and the assumption of responsibility by all EU member states in hosting refugees according to the population and capabilities of each state.

• Taking measures and creating dignified living and hygiene conditions in the reception infrastructures.

• The abolition of repressive military operations

• Against wars and for the dissolution of NATO which is the cause of the suffering of the peoples. Against any participation of our countries in the imperialist plans and interventions

In the struggle to defend the interests of the working class against nationalism, racism and xenophobia, there is no room for any discriminations. Every form of discrimination allows capital and those who are creating the refugee issue to intensify exploitation against workers and maximise their profits.

We strengthen the common struggle against capitalist exploitation, for better wages, working conditions, free public and education for all.

We organize actions to honor the 75 years of WFTU in our countries.