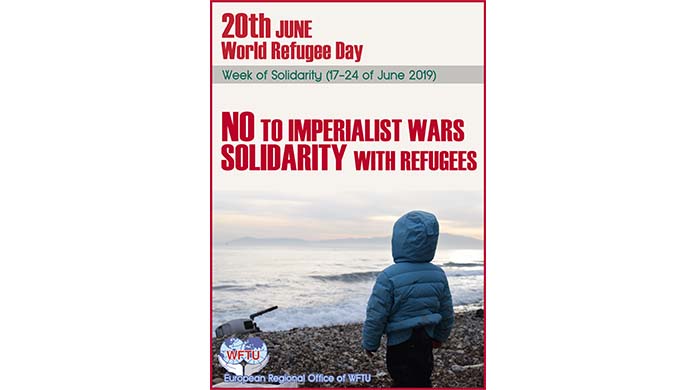 On the occasion of 20th June 2019, World Refugee Day, the European Regional Office of the WFTU, expresses its class solidarity with the millions  refugees who were forced to flee their countries, in order to escape from the ongoing imperialist wars,  poverty and misery, seeking a better and safe life for them and their children.

Unfortunately, the root causes that are forcing millions of people to leave their homes and families are not only not being eradicated, but instead are growing and forcing more and more people to be uprooted as refugees. The same forces responsible for turning millions of people into refugees, headed by imperialist powers like the United States, NATO, the European Union and  its member states, which support or participate in wars and military interventions that have led to destabilization in the Middle East and North Africa, are the very same forces which are promoting anti-immigration policies and racist rhetoric, criminalizing these people and at the same time condemning them to poverty and exploitation.

Those millions of people becoming refugees join many others who for decades live in those precarious conditions, facing the denial of their right to return and other fundamental rights, in particular the Palestinian people.

Walls are also being erected on the borders with Mexico, but also within the EU itself to prevent migrants and refugees from passing, resulting in them being trapped in wretched conditions. There are thousands of refugees, primarily women and children, drowning every year at sea trying to find a safe haven. Even when they manage to reach somewhere, they face criminalization and institutional racism and exclusion, “concentration camps” and being forced into returning to “safe countries” like Turkey under a “shameful agreement” with the EU.

In EU Member States, new measures are being taken against refugees and immigrants. The only ones who will be allowed to pass through the tight control of business groups and their governments will be those needed as cheap labour, higher education people and those that brought with them some wealth. The victims of their barbaric politics will be dealt with by enforcing repression even for children and the cases of family reunification, with on-the-spot relocation, with fences and closed ports.

As a result of these anti-immigrant policies and decisions of the EU, the extreme right-wing, neo-Nazi and fascist organizations and parties are growing stronger, intensifying their attacks and committing daily crimes and violent acts against refugee and migrant groups and against all those who support them.

The class-based trade union movement in Europe condemns such policies. We declare our commitment to the struggle against  “Fortress Europe”, the Europe of fences and refugee concentration camps, the Europe of racism and exclusion. On the basis of the principles of solidarity and internationalism, our movement will continue to call on the working people of Europe to promote solidarity with refugees and immigrants and to organize and struggle together  against exploitation and discrimination, for equal rights and access to free public services. In a joint struggle against imperialism, for work with rights, to ensure human dignity and the integration of immigrants and refugees into local societies.

. The right to return of all refugees to be ensured and in particular for the Palestinian refugees – which requires the withdrawal of their territories by Israel to allow the creation of an independent, sovereign and viable Palestinian state.

At the same time, we will continue in cooperation with the peace movement our actions to promote peace and solidarity, for the termination of the  wars  and the disengagement of each country from NATO in order to achieve its   dissolution , which is the cause of the suffering of the peoples.

We shall continue the struggle to defend the interests of the working class against nationalism, national oppression and chauvinism that divides working people, against racism and xenophobia, defending democratic rights and sovereignty. There is no room for any discrimination in the trade union movement. All forms of discrimination enable capital to intensify exploitation to the detriment of working people.

The European Regional Office of the WFTU, working people across Europe, will strengthen during the week of action on 17-23th June and through various events and actions their solidarity between the peoples and build a bastion of resistance against fascism, racism and nationalist hatred.

Our struggle is common.