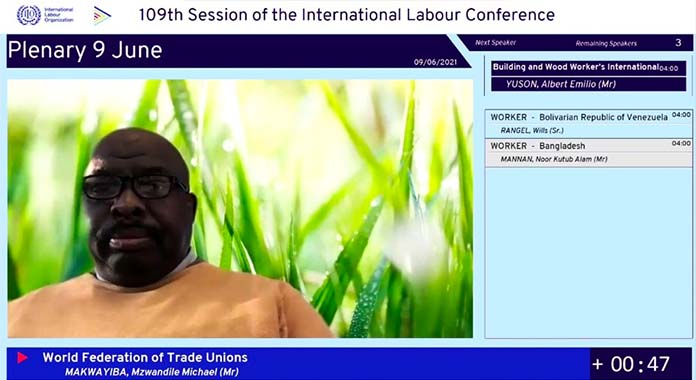 The workers all over the world have been left exposed to the pandemic and its consequences by a system that neither wants nor is capable to provide the necessary means for dignified livings, healthcare, educations, the right to work, and work with rights.

The new economic crisis, that loomed before the pandemic and has been accelerated by it, marked a new attack against labor achievements and rights.

The attack on eight-hour day, the further deregulation of the employment relationship, the institutionalization of flexible forms and working conditions, the revision and abolition of fundamental labor laws, the efforts to circumvent the sacred right to strike, the abolition of the Sunday day-off, blatant violations of even the most fundamental trade union and democratic freedoms, are being perpetrated all over the world under the pretext of a pandemic. In addition, flexible forms of work such as teleworking are widely used to increase workers’ exploitation.

According to ILO reports, working hours equivalent to 255 million full-time jobs are lost in 2020, while global labour income was 3.7 trillion or 8.3% lower than it would have been in the absence of the pandemic. These new cuts in workers’ incomes are added to the established wage reductions of the previous economic crisis. The most vulnerable groups of the working class, once again, are disproportionately facing the consequences of the crisis.

Over the past months, it has become clear once again that the working class can only rely on itself. The moral superiority of the workers over the employers was revealed, and it has been confirmed that the class struggle continues under any circumstances and despite any repressive measures.

The World Federation of Trade Unions, proud of the role and action of its members throughout the past months, calls upon the workers around the world to join the class unions and intensify their struggles for trade union and democratic rights and freedom, free, universal, and full healthcare, free and immediate vaccination of the whole population.

Hope lies on the struggles,

We must take our lives and future in our hands.