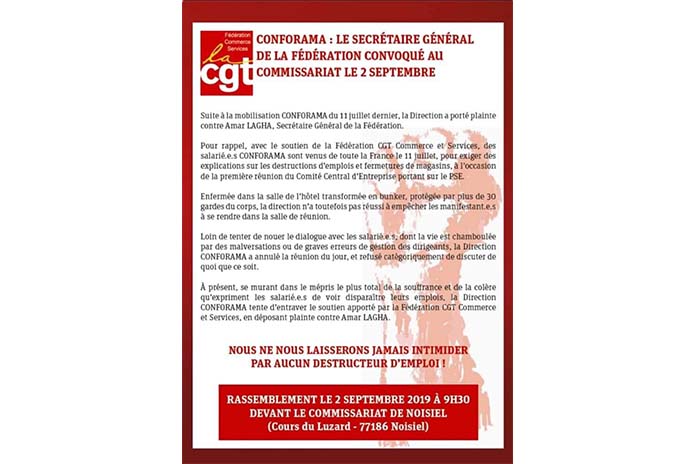 President Macron, a champion of authoritarianism and anti-labor measures

On behalf of the International Class Trade Union Movement, we express our solidarity with all the workers of France who are suffering from the anti-worker attacks of the French Government.

We are all close to Amar Lagha Secretary General of the Federation CGT Trade and Services and a trade union cadre of the World Federation of Trade Unions.

Amar has done only his duty; with courage, he has supported the struggle of CONFORAMA’s workers. This is how the militant trade unionists must act; without being afraid of the bourgeoisie and the governments of the bourgeoisie.

We call upon the government of France and the employers to stop the intimidation against Amar.

If, on September 2nd which is the day when Amar Lagha is scheduled to appear at the Commissariat, they support the complaints against him, they will find us all united against them; and we openly say:

“Mr. Macron, champion of the authoritarianism and anti-worker policies, your intimidations against trade unionists will be gone with the wind…».