Home LATEST NEWS THE OS ČMS STATEMENT ON CRITICAL SITUATION ON THE RAILWAYS IN CZECH...

Trade Union Association of Bohemia, Moravia & Silesia (OSČMS), Czech Republic, the WFTU affiliate, expresses its full support and solidarity to the TU Association of Railway Workers, the Federation of Engine Drivers and other TUs working within today’s liberalized railway transport.

The OSČMS considers those disasters alarming and calls upon Czech government as well as the responsible officials to take the most quickly the measures to prevent the disaster like those to repeat. In the official reports, there is spoken overwhelmingly about human failures; however, it has always its own reasons. Trade Union organizations, nevertheless, must always defend the interests of the employees, those of both the engine drivers and the other employees of the Rail & Transport Road Administration (SŽDC), ČD CARGO and other subsidiary companies.

It’s necessary to ask the question if the time has come for the employees of various liberalized railway companies bringing the condition to declare the strike emergency and then to come into negotiation with the Czech Republic’s government, with the Ministry of Transport respectively.

The experts keep discussion about possible engine drivers’ fatigue or their lack of experience. Well, the overtax, the rest deficit, the stress, it can be the reasons of those tragedies. It is necessary, however, to take into account, too, the size of share of the electronic safety systems and their real functioning. Moreover, in the case of the railways without the electronic safety appliances, the demands put on the engine drivers are too high. There is plenty of such railways remaining in our country. The current government as well as the previous ones bear the responsibility for the rail politics, the rail liberalisation included.

The OSČMS has never supported the privatization of railway transport under the pretext of the EU dictate of its so-called necessity. We reject it as to be both non-conceptual and anti-employees one. Our approach in this issue is in accordance with the WFTU’s one.

The railways as the public transport’s backbone must remain in the hands of the state, in the hands of the national carrier respectively. Therefore, the OSČMS calls upon the trade unions acting within the sector of railways and attendant services to act in unity. Thus, THE OSČMS calls upon the government to start immediately and speedily solve this joyless, difficult situation, in technology respect as well as with regard to the engine drivers’ heavy workload. It’s impossible to ignore the human factor; it is necessary to examine, however, what’s the level of the staff’s workload, and, too, if their resting time between their two particular shifts is adequate towards their responsibility for the passengers’ lives. Tens of the injured and several dead people, the engine driver included, it is too high a price to pay for the railway liberalization. The current tragedy as well as series of consecutive train crashes, it is an enough conclusive argument why the OSČMS stands so vigorously against liberalization of railway transport.

We call upon friendly Trade Unions to express their solidarity with fair struggles of Czech both engine drivers and other railways workers. Within the last period, the situation around railway accidents is critical, with some people dead and tens people injured, and (during last weeks especially) there is no day with no railway accidents, the two-trains-crashes included.

The working people’s solidarity is strength!

With fraternal and comradely greetings 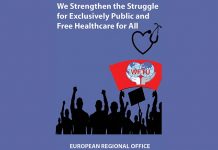