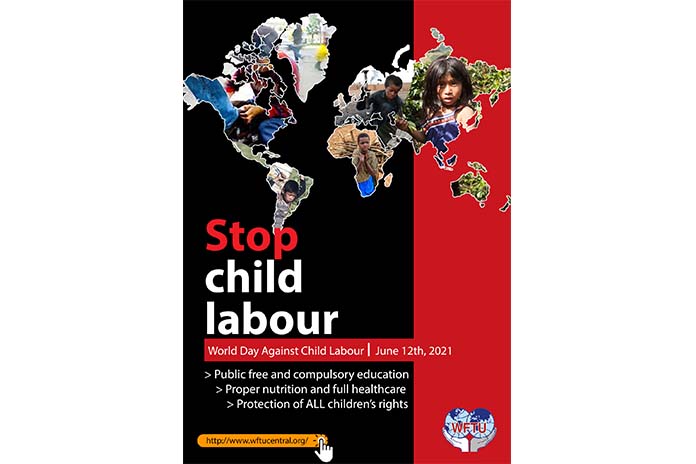 The World Federation of Trade Unions (WFTU), on behalf of its 105 million affiliates in 133 countries on the 5 continents, reiterates, also on the occasion of this International Day Against Child Labor, its commitment to continue the fight against the violation of fundamentals rightsof the child, against the system that generates barbarism against children; We will continue the fight for a better tomorrow for the new generation.

In an exploitative society, which generates wars, unemployment, poverty, refugees, human trafficking, social exclusion of vulnerable social groups such as people with disabilities as well as continuous violations of fundamental rights of the popular strata, children could not be an exception. On the contrary, they are the ones who suffer the biggest blows.

When there are 250 million children working around the world, the reality is very far from the fundamental principles of international conventions. The UN, UNICEF and the ILO speak of more than 250 million children between 5 and 14 years old, who work in modern hells. At least 60 millions of those 250 million working children are faced with particularly adverse and inhumane conditions (in mines, plantations, industries, child slaves or domestic helpers); 300 thousand children are recruited or kidnapped to serve in armed groups and armies; 100 million children – mostly girls – are out of school while 600-700 million children live on less than a dollar a day. In Europe, 300 to 500 thousand minors work illegally, victims of sexual exploitation, coming from Third World countries. Every day, thousands of minors collapse from exhaustion, working for 14 and 16 hours a day in the labor dungeons of the large multinational garment companies for a few pennies a day.

Once again, the criminal indifference of the system is confirmed, which, in order to maximize its profits, does not hesitate to sacrifice children’s lives. This reality shows the rotten and old face of the capitalist system that will not cease to exist until the “wretched of the earth” send it to the grave of history, so that children live in a world that will be completely theirs.

The fight for a better future for the new generation with expectations must hit the exploitative capitalist system, not compromise, but fight against it, until the construction of a new society without exploitation of man by man.

– The right to adequate food and quality health services

– The right to a universal, free and compulsory education for all children

– The right to leisure and children’s access to all activities capable of developing their personality and talents.