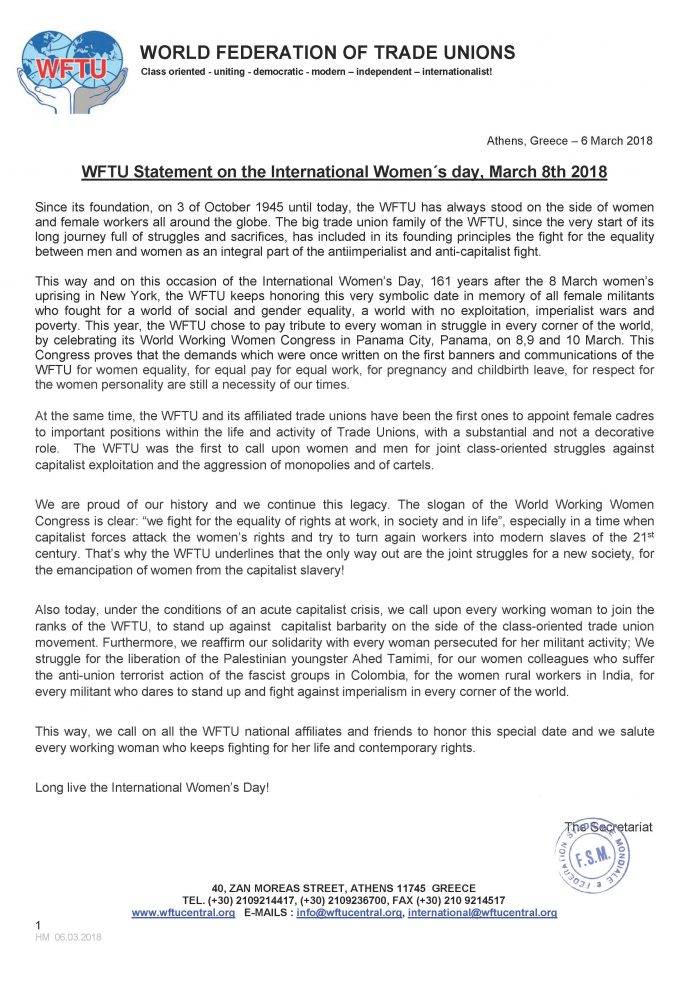 Since its foundation, on 3 of October 1945 until today, the WFTU has always stood on the side of women and female workers all around the globe. The big trade union family of the WFTU, since the very start of its long journey full of struggles and sacrifices, has included in its founding principles the fight for the equality between men and women as an integral part of the antiimperialist and anti-capitalist fight.

This way and on this occasion of the International Women’s Day, 161 years after the 8 March women’s uprising in New York, the WFTU keeps honoring this very symbolic date in memory of all female militants who fought for a world of social and gender equality, a world with no exploitation, imperialist wars and poverty. This year, the WFTU chose to pay tribute to every woman in struggle in every corner of the world, by celebrating its World Working Women Congress in Panama City, Panama, on 8,9 and 10 March. This Congress proves that the demands which were once written on the first banners and communications of the

WFTU for women equality, for equal pay for equal work, for pregnancy and childbirth leave, for respect for the women personality are still a necessity of our times.

At the same time, the WFTU and its affiliated trade unions have been the first ones to appoint female cadres to important positions within the life and activity of Trade Unions, with a substantial and not a decorative role. The WFTU was the first to call upon women and men for joint class-oriented struggles against capitalist exploitation and the aggression of monopolies and of cartels.

We are proud of our history and we continue this legacy. The slogan of the World Working Women Congress is clear: “we fight for the equality of rights at work, in society and in life”, especially in a time when capitalist forces attack the women’s rights and try to turn again workers into modern slaves of the 21st century. That’s why the WFTU underlines that the only way out are the joint struggles for a new society, for the emancipation of women from the capitalist slavery! Also today, under the conditions of an acute capitalist crisis, we call upon every working woman to join the ranks of the WFTU, to stand up against capitalist barbarity on the side of the class-oriented trade union movement. Furthermore, we reaffirm our solidarity with every woman persecuted for her militant activity; We struggle for the liberation of the Palestinian youngster Ahed Tamimi, for our women colleagues who suffer the anti-union terrorist action of the fascist groups in Colombia, for the women rural workers in India, for

every militant who dares to stand up and fight against imperialism in every corner of the world.

This way, we call on all the WFTU national affiliates and friends to honor this special date and we salute every working woman who keeps fighting for her life and contemporary rights.